The Museum of Human Evolution is born in Burgos 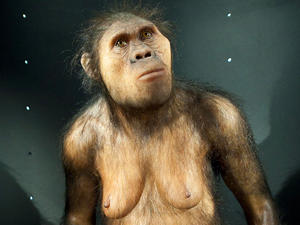 Today theMuseum of Human Evolution, an initiative of the Junta de Castilla y León whose objective isdisseminate knowledge of the evolution of our species based on archaeological findings and scientific studies carried out in the deposits of the Sierra de Atapuerca, declared a World Heritage Site.

The Museum will allow simultaneous contemplation of themain original fossils found in Atapuercawith their place of origin through a shuttle bus that connects the Museum with the sites themselves and their natural environment, allowingalso know archaeological research.

The building that houses the Museum is the work of the architect Juan Navarro Baldeweg, has an area of 15,000 square meters and is divided into four floors, one of them dedicated to Atapuerca. This offers a general idea about the Sierra and its special ecosystem that preserves a continuous archaeological and paleontological record that spans the last million years. The rest of the floors show, through various museological forms,Darwin’s theory of evolution, theworks related to the brain of Ramón y Cajalor one“Gallery of Evolution”with the representation of the main reproductions of hominids made by the Parisian Elisabeth Daynès.

Among the most emblematic remains that are exhibited in the center arethe face ofHomo predecessorand the complete skull and hip of Homo heidelbergensis.

Visitors who come to the new Museum will know the importance and the meanings that the excavations have for the knowledge of our evolution. In addition, you will find answers to questions such as:What makes us human?Will we evolve into another species? Why are we the only animal that makes art? orWhat was the favorite music of our ancestors?

Found in Huelva a fossil with more than 500 million years

September 19, 2022
A new species of trilobite adds to the knowledge about life in the Cambrian.

How many T. rex fossils are there and where are they?

This reptile, now extinct, lived at the time of the dinosaurs

September 19, 2022
'Opisthiamimus gregori' lived with dinosaurs like 'Allosaurus' and resembled a lizard. It belongs to the same lineage as the New Zealand tuatara.

September 16, 2022
The fossil corresponds to an ancient jawed fish. Its structure sheds light on the evolution of the human body.

Bill Gates unveils a toilet that turns poop into ashes

Google launches a tool to delete personal information from searches

Listening to the consumer helps us understand market trends: Globant

WhatsApp has new functions in the calls of the app