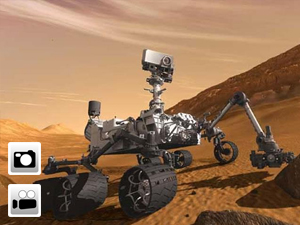 On September 19, the robot Curiosity, which landed a little over a month ago on the surface of the red planet, encountered a pyramidal stone on its way . NASA technicians thought it was a good time for the rover to make a stop and put all its analytical instruments to the test.

The stone, named Jake Matijevic after a recently died NASA mathematician, stands about 10 inches tall, about the size of a soccer ball, and is shaped like a perfect pyramid. Curiosity detected the rock with the X-ray spectrometer that incorporates its articulated arm of more than two meters. Subsequently, it has carried out the chemical analyzes with the rest of the precision cameras with which it is equipped, although NASA has not yet given details about the composition of the find.

After five days of work, Curiosity has resumed its march through Gale crater, one of the areas of Mars that could have favorable conditions to support life. He is currently heading to the so-called Gleneg area , where he will be able to test his ability to analyze drilled dust inside rocks. In this area there are different types of soil of different shades. One of them, light in color, especially attracts the attention of scientists as it retains heat during the day and well into the night, suggesting an unusual composition.

August 2, 2022
The goal is to use the gravitational lensing phenomenon with our star and for this to help us detect life on the surface of another planet, if there is any.

NASA aims to return samples from Mars to Earth in 2033

August 1, 2022
The review is finally over and the sample return mission continues.

Russia will leave the ISS from 2024

July 27, 2022
It is confirmed. Russia will not continue working on the International Space Station once its current commitments to the project expire.

New images of the largest canyon in the solar system

The return to the Moon with the Artemis 1 mission would start on August...

July 21, 2022
NASA has already announced the provisional date of the first unmanned mission of the US program to return to the Moon.