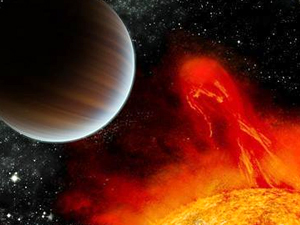 María Cruz Gálvez-Ortiz and Dr. John Barnes, astronomers from the University of Hertfordshire, have participated together with other European astronomers in the discovery of the youngest exoplanet known around a solar-type star, which has been baptized as BD + 20 1790b .

It is a giant planet , six times the mass of Jupiter, and is "only" 35 million years old . It orbits a young active central star closer to the distance than Mercury from the Sun. Young stars are usually excluded from planet searches because they have strong magnetic fields that generate flares and spots. This stellar activity can mimic the presence of a companion and therefore makes it difficult to search for signs of a planet.

In this case, the planet was detected by "very small variations in the speed of the host star, caused by the gravitational pull of the planet as it travels its orbit," explained Gálvez-Ortiz. The technique is known as the "Doppler wobble technique" . The researchers analyzed observations made over the last five years with different telescopes, including the Calar Alto Observatory (Almería, Spain) and the Roque de los Muchachos Observatory (La Palma, Spain). The results have been published in the journal Astronomy & Astrophysics .

This is what the Earth's magnetic field sounds like

October 25, 2022
The shield that protects our planet sounds 'pretty scary', according to ESA engineers.

October 25, 2022
Darkness looms in this Hubble Space Telescope photograph. He has focused his telescopic eyes on NGC 1999.

These are the most Earth-like exoplanets

October 24, 2022
Among the more than 5,000 exoplanets discovered to date, these are some of the most similar in size, mass, temperature or star to the one they orbit.