In Southwest Asia there were hunter-gatherer groups who burned animal droppings in the late Stone Age. The discovery of these charred remains suggests that they used manure as fuel, so the researchers think that they had access to this material thanks to living with animals . This theory would place the domestication of animals before the birth of agriculture , however, we still do not know from which animal the manure came or what kind of relationship existed between humans and animals at that time. 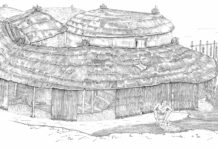 Reconstruction of the houses of Abu Hureyra. Smith et al. 2022.

In the 1970s, plant samples were taken from an archaeological site at Abu Hureyra , a site now submerged by the Tabqa dam, built on the course of the Euphrates River as it passes through northern Syria. The samples offer a chronology of between 13,300 and 7,800 years old , which covers a very interesting period to study societies in transition from the Paleolithic to the Neolithic , with the agricultural and livestock revolution.

Alexia Smith , an archaeobotanist at the University of Connecticut, has led a research team that has been commissioned to examine these samples along with archaeological data from botany and zoology to trace the first contacts between humans and domestic animals , as well as the selection of fuels. and other uses used for manure.

“Combined, these observations suggest that small numbers of live animals (possibly wild sheep) were kept at the site by Epipalaeolithic hunter-gatherers to supplement gazelle hunting, raising the question of whether early experiments in animal husbandry arose at the same time or before the start of agriculture”.

The results of the study show variable amounts of spherulites, small crystals that form in the intestines of animals and end up being deposited in the manure. Between 12,800 and 12,300 years ago there was a major uptick in the use of manure for fuel. This rebound coincided with a change in housing, which went from a circular structure to a linear one, which is usually an unequivocal sign of a more sedentary lifestyle . Before long, grazing sheep and goats began to overtake hunting gazelles.

“As the hunter-gatherers of Abu Hureyra began to interact with wild taxa in different ways, they set in motion a remarkable transformation in the way people interacted with animals, plants and their environment.”

It would be key to discover which animal left the manure used as fuel, since some specialists argue that it could have been taken from wild gazelles and not necessarily from herds of sheep intentionally attracted to the town. In any case, this type of study is still interesting to detect the first experiments of the human being with the environment beyond hunting and gathering.

It is from this type of studies that more points of view are being offered about the domestication of plants and animals, which cannot inevitably be seen as a revolution based on drastic changes. On the contrary, specialists put their efforts in finding evidence of the transition between the wild and the domesticated , the foraged and the cultivated, or between the hunted and the grazed . This plurality of situations has a notable impact on our way of recounting the passage from the Stone Age to the Neolithic , which becomes a diffuse and varied image depending on the geographical point to which we pay attention. A complex explanation that, however, does nothing more than adjust to the reality of the past.

“While important insights have been gained about this elusive and nascent period, there is still a lack of clarity regarding the full range of human-animal interactions and practices that may have existed throughout the late Epipaleolithic and early Neolithic, as dominant subsistence strategies shifted from hunting and gathering to herding and farming. This largely reflects a dearth of reliable markers with which to observe variable early behavior archaeologically. The nature of human-animal interactions could have been very diverse, fluid and flexible, both in temporal and spatial gradients, and some of the practices may no longer exist.”

Thus, researchers face new challenges and study perspectives that can even be applied to archaeological remains fifty years after they have been collected. New discoveries and research will continue to gradually bring us closer to this fundamental transitional stage in the development of the human way of life.