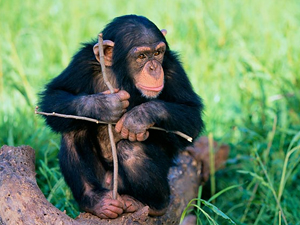 Generosity is not an exclusive trait of the human being. Researchers at the Yerkes National Primate Research Center (USA) have shown that chimpanzees have a clear tendency to altruism and prosocial behavior .

For the study, researchers Victoria Horner and Frans de Waal conducted a test that focused on offering seven adult female chimpanzees a choice between two similar actions: one that rewarded both the participant and a partner, and another that rewarded only the participant . In each trial, the subject who chose, always with a partner in sight, chose between different colored cards. One token could be exchanged for food offered to both members (prosocial), and another token of another color offered food only to the one who chose (selfish). All seven chimpanzees showed a preference for the prosocial option .

The study also shows that the subjects were altruistic especially with those who waited patiently and carefully reminded them that they were there. Chimpanzees who chose the tokens were less likely to reward those who made a fuss, begged, or spat water on them, thus showing that their altruism is spontaneous and not subject to intimidation .

Now, the researchers plan to determine whether the altruistic tendency of chimpanzees is related to social interactions within the group, such as the exchange of food or social support.

2 hours ago
Is it the heat - or toxic chemicals that may have been dumped illegally in Wroclaw, Poland? In the Oder the fish are dying en masse. Commercial fishermen are shocked.

3 hours ago
The killing spree in Trier triggered nationwide horror. There are five dead and many injured. Now the trial of the suspected gunman is coming to an end.

Hatz IV becomes citizen money: Zoff between SPD and FPD – these are the...

3 hours ago
Away from Hartz IV, towards citizen income: The planned reform is causing internal discussions in the federal government. What the Greens, FDP and SPD are arguing about.

4 hours ago
The Formula 1 technical regulations for 2022 are intended to stifle certain developments in single-seaters, but Aston Martin has turned it around.

5 hours ago
At first glance, the photo shows a red fireball, but that is deceptive. The photo is real, but it doesn't come from deep space.