Invasive alien species today represent the main cause of biodiversity loss, and due to globalization and the consequent transport of goods, which covers enormous distances in a very short time, more and more species are accidentally introduced.

In order to apply preventive measures and prevent its spread , early detection of potentially invasive species is essential. Many of the accidentally introduced species are difficult to detect. When the alarms go off, it is already too late and the invasion is well advanced. However, on other occasions, even if the species has an accidental introduction, it can be detected early thanks to the fact that they are very striking. This is the case of fireflies .

This group of beetles are relatively easy to spot, thanks to their bioluminescent ability. So much so that citizen science projects have often been carried out to inventory and census fireflies. The projects «Have you seen a firefly?» by the Gusanodeluz team, in Spain, or l’Observatoire des vers luisants et des lucioles , in France, stand out. One of the most recent was the regional project « Grup Cucadellum », of the Institució Catalana d’História Natural (ICHN), whose objective was to obtain a detailed idea of the presence and absence of fireflies in Catalonia. 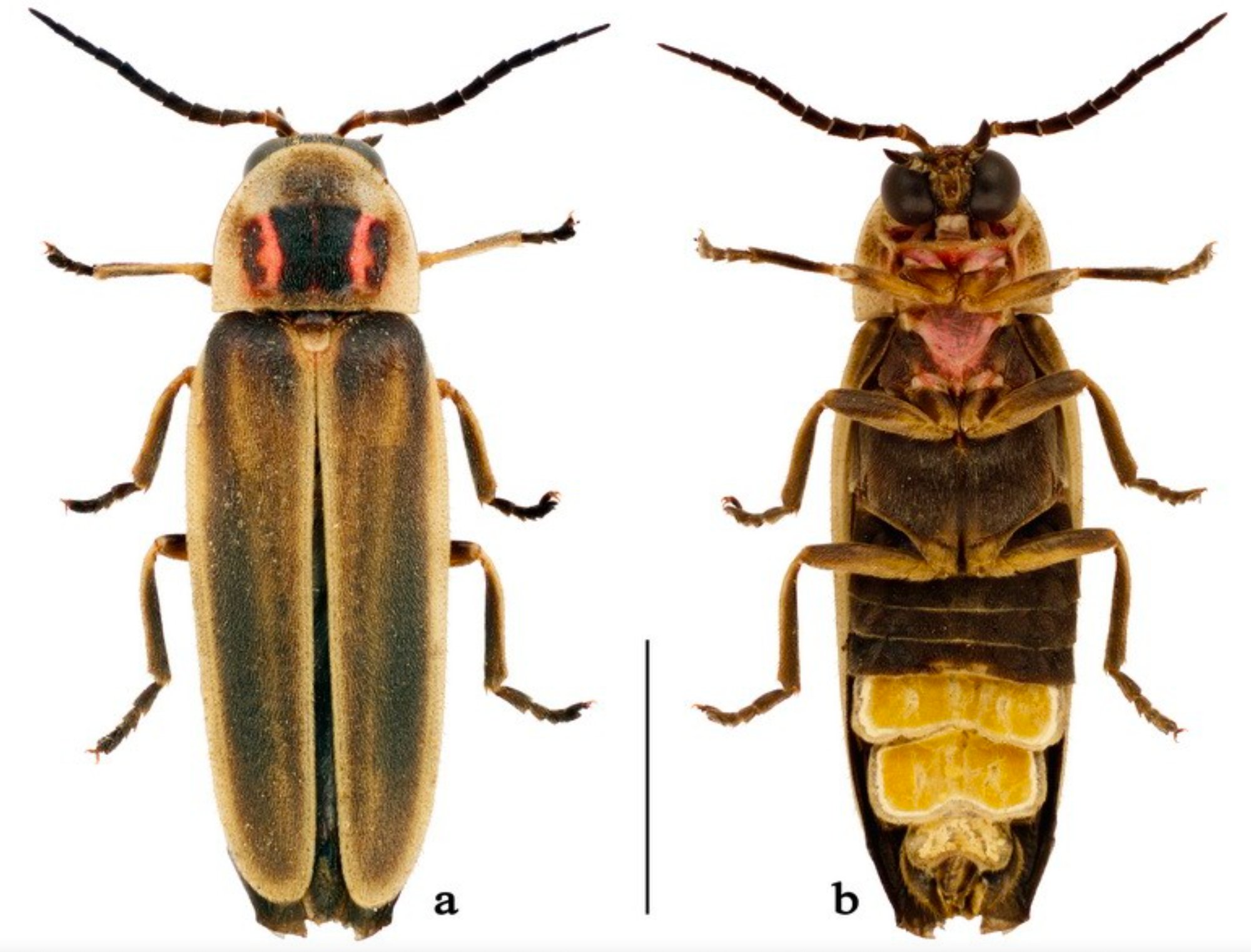 Dorsal (a) and ventral (b) view of a male of the species identified as ‘Photinus immigrans’ (Zaragoza-Caballero et al., 2018).

Thanks to these citizen science projects, in 2016, in various towns in the province of Girona, 44 specimens were detected —36 males and 8 females— of a species of firefly that had never been observed in Spain or France. It could not be identified as belonging to any described European species, so two years later it was described as a new species : Photinus immigrans .

The problem was that the genus Photinus , with more than 300 described species, and to which this new species belonged, is wholly American . Until then, no species was known whose native distribution was not in the New World.

Since that first encounter in 2016, and in the following years, new observations of this strange species have been made. What initially seemed like an anecdotal observation began to be perceived as a clear dispersion pattern, following the valleys of the rivers in Girona. In 2020, it reached the south of the province of Pyrénées-Orientales (France).

On the other hand, in October 2018, another observation of P. immigrans was made, this time, in Extremadura, at 750 km away from the original populations. The colony has been kept in stable conditions due to its location: it is located on a private prairie estate, in a residential area and surrounded by agricultural fields with sandy soil, an environment that for the fireflies is almost like an island.

Also in South America, as in Europe, there are citizen science projects dedicated to collecting information on fireflies. In these projects, the identification of the species is done through photographic resources. One of the species photographed in Argentina and Uruguay was, at first glance, identical to the Spanish species identified as P. immigrans .

It was Photinius signaticollis . So the entomologist Lucas Ezequiel Rubo, from the University of Buenos Aires, photographed and collected live specimens so that a collaborative research team made up of professionals from various research centers in Argentina, Spain and France could verify whether or not it was the same species.

And, indeed, the one that was described as P. immigrans is, in fact, P. signaticollis , a species of South American firefly that arrived in Catalonia and began to spread through the valleys , in recent years. This was described in the study that this collaborative team published in 2022 in the scientific journal Insects . The scientific name ‘ P. immigrans ‘ is, by nomenclature rules, converted into a synonym of P. signaticollis.

This discovery explains the rarity of finding a species of firefly in Spain whose lineage is exclusively American; It also shows why initially they were only located in very specific places and then it has been observed how it has been spreading. Behavior that responds to that of an invasive species , so the information obtained so far can serve as a starting point for the preparation and implementation of measures to stop its expansion.

The unknown pending to be resolved is that of that Extremaduran population, isolated from the rest. If it will have been introduced from South America independently, or if it will have been transported from Catalonia. The researchers are confident that further DNA studies will resolve this question.

October 27, 2022
If alligators and crocodiles have the genes that allow them to form feathers, why aren't they feathered?

October 27, 2022
A new report warns that humanity is 'unequivocally facing a climate emergency'.

Is recycling a waste of time? The reality is that only 6% of plastic is recycled