They discover the great-great-grandfather of predatory dinosaurs in Argentina 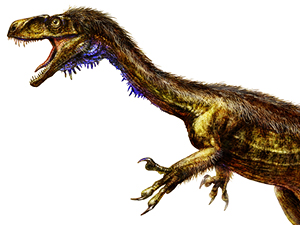 Argentine paleontologists have found the remains of a small bipedal dinosaur, which lived 230 million years ago and could be theancestor of all predatory dinosaurs, includingtyrannosaurus rexYVelociraptor mongoliensis. They have baptized itEodromaeus Murphu, which means “corridor of dawn.” The fossils were found in theIschigualasto formation, in the northeast of San Juan, Argentina, where Ricardo Martínez and his team from the National University of San Juan began working in 1984.

As the discoverers publish today in the magazineScienceIt is a small dinosaur, which was less than 2 meters long from head to tail and weighed around 8 kilos. Was provided withsharp serrated teeth prepared for cutting meat. In addition, their upper limbs had long fingers and claws to tear their victims to pieces. The hind legs had the proportions of aspeedy runner.

? We are seeing a snapshot of the dawn of the dinosaurs ?, explains Paul Sereno, paleontologist at the University of Chicago (USA) and co-author of the study. From the discovery, scientists have come to the conclusion that, 230 million years ago, there was already an enormous diversity of dinosaurs but also of other reptiles and herbivores. To dominate all terrestrial habitats in the Jurassic and Cretaceous periods “there was not a single advantage, or a stroke of luck, but a long period of evolutionary experimentation in the shadow of other groups”, Sereno emphasizes.

2 days ago
New work on multiple dinosaur fossils reveals many tidbits about dinosaur metabolism. Was Triceratops warm or cold blooded? And Stegeosaurus? We explain it to you below.

Were there dinosaurs in the snow?

May 20, 2022
Dinosaurs that lived in Alaska and other areas with cold climates.

May 13, 2022
Who would win in a fight the spinosaurus or the tyrannosaurus rex? What is the strongest dinosaur in the world?

They find the complete fossil of a pregnant female ichthyosaur

May 13, 2022
The remains of the female ichthyosaur were unearthed from a glacier that, due to climate change, is melting by leaps and bounds.

Kepler, the Woody Allen of the Renaissance

The 'Dragon of Death', a new flying species that lived with the dinosaurs