The Federal President encourages people in the Ahr Valley

The smell of damp masonry is in the air. The shops in Ahrweiler show the traces of the devastation. But when the Federal President visits, there are also signs of hope.

Bad Neuenahr-Ahrweiler – Almost three months after the flood disaster in the Ahr valley, Federal President Frank-Walter Steinmeier met residents and helpers and encouraged them. “We will not forget you,” he promised the people of the region.

The Deputy Prime Minister of Rhineland-Palatinate, Anne Spiegel (Greens), thanked the state government for the visit, which was “a very, very important signal”. “The extent of the destruction only becomes really clear when you take a look into the houses here in the streets,” said the head of state on Sunday, visibly concerned after a walk through the historic old town of Ahrweiler. On this sunny day, too, “the memory of death has not faded”, he added at the upper gate of the old city wall, before continuing to the wine-growing community of Mayschoss and talking to helpers in Grafschaft.

His way through the once idyllic district of Bad Neuenahr-Ahrweiler began at the road bridge, which broke in the night of July 14th to 15th in the force of the masses of water pushing through the valley after extremely heavy rain. A temporary bridge has now been set up there. Then the Federal President ran to the market square – there was still the smell of damp masonry in the air, from damaged houses and shops with inscriptions such as “We’ll continue” or “1000 thanks to the helpers”.

On the market square, Steinmeier spontaneously approached the stand of the private initiative “Today for Tomorrow” and spoke to the helper Tamara Segers from Havixbeck near Münster, who with her husband and friends set up a constant contact point for practical help and discussions over coffee and cake Has. You were happy about the unexpected conversation with Steinmeier, said Segers. “It is important to people that they are not forgotten.”

In the neighboring parish office of the St. Laurentius Church, the Federal President met with two married couples who lost relatives in the flood. On the further way he was greeted by residents and asked into the house.

Hope for the return of the tourists

“There is little to be heard of allegations,” said Steinmeier afterwards. Of course, the disaster warning system is an issue. But the focus is on mourning – and coping with everyday life with a view to the approaching winter. He hoped that there would be at least temporary solutions for everyone who was still without heating and electricity.

Climate Protection Minister Spiegel spoke of signals of hope and reaffirmed her commitment to support the affected communities and the people living there. The reconstruction must proceed “quickly, sustainably and climate-resiliently”.

The visit of the Federal President was also followed by the antiquarian Wolfgang Huste, whose shop in Ahrweiler was destroyed by the flood. Together with his partner, he helps at a stand at the makeshift bridge, where food and clothing are handed out. He is hoping for the return of the tourists, who made up 80 percent of his sales before the disaster. Then he wants to buy new shelves and showcases with the hoped-for support. “If everything goes well with the craftsmen, we can go back to the shop in March or April.” 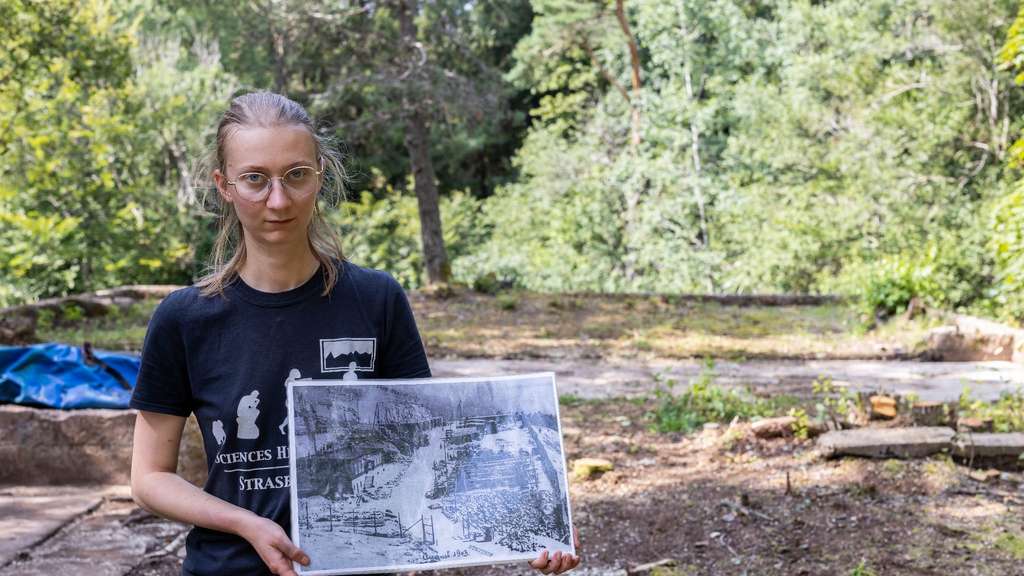 Former Natzweiler-Struthof concentration camp in Alsace is being researched

A wooden heart or a shoe: archaeologists have discovered many objects in former concentration camps that testify to the inmates’ will to survive. But the former forced camps have to be found first.

Former Natzweiler-Struthof concentration camp in Alsace is being researched

On September 1, Steinmeier took part in the state ceremony for the victims of the flood disaster. At that time he said at the Nürburgring that it was not just about emergency aid for reconstruction. “You need our help and our attention not only now, in the acute emergency, but for a long time.”

In Rhineland-Palatinate, 133 people in the particularly affected Ahr valley and one person in the Trier region were killed in the flood after extremely heavy rain on July 14th and 15th. 49 people lost their lives in North Rhine-Westphalia. There, serious damage was done to the Euskirchen district, the Rhein-Sieg district and parts of the Bergisches Land, among others. dpa

4 hours ago
In the rampage on December 1 last year in Trier, five people were initially killed. Now a 77-year-old died after long hospital stays.

21 hours ago
In her third case, Heike Makatsch, as "Tatort" commissioner Berlinger, has to do with a blind law student and a decadent young couple. But it is also about the single investigator herself.

"Moornixe" successfully lifted out of the water

October 17, 2021
A ship that sank during the Ruhr floods in July has been lifted out of the water. Now the "Moornixe" should actually be made afloat again.

October 16, 2021
A very simple idea: a rope is stretched across the road, on which squirrels can safely change sides. There is in Trier, but also in Berlin and Hamburg.

Red Cross remains active in the Ahr valley over the winter

October 16, 2021
After up to 3,500 helpers from the DRK were deployed in the first few weeks after the devastating floods in mid-July, today there are still almost 50 helpers. These will remain on site until further notice.