What is the origin of feathers?

It has always been considered that feathers are a characteristic and exclusive feature of birds. Some structures that cover their skin, which play a role analogous to the hair of mammals, and which currently fulfills many other functions: camouflage, communication, defense, impermeability, shelter, and, perhaps the most important, the flight. 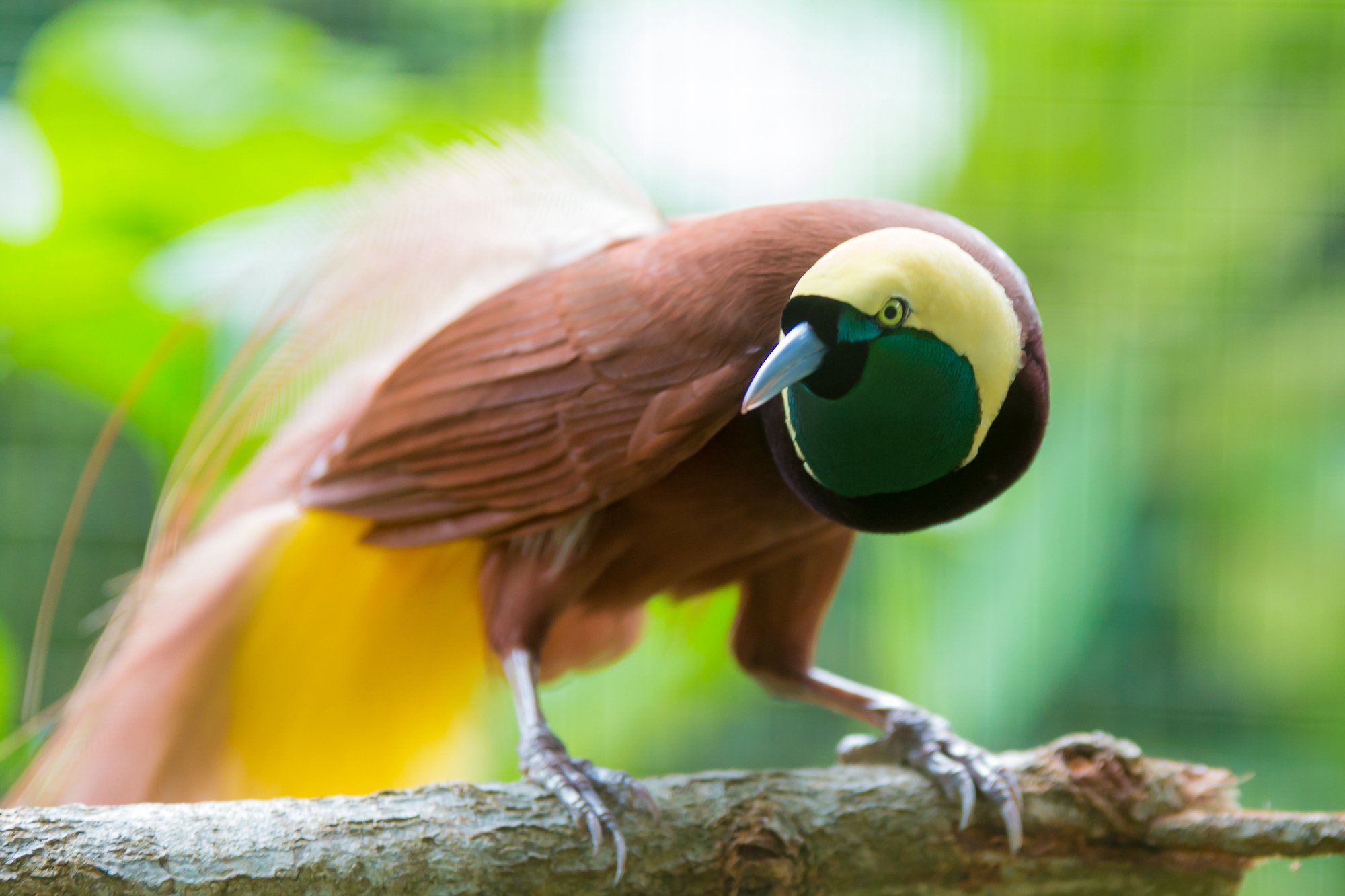 The feathers, characteristic of birds.

The fact that two or more groups of living beings that are at a certain evolutionary distance present the same structure can be explained from two possible hypotheses.

One of them involves a single emergence of the character in an ancestral state , which is then inherited by descending groups; in some of them, the character is evolutionarily lost and in others it is maintained. A good example is found in the large group of tetrapods , which includes amphibians, reptiles and birds, and mammals. Originally, their common ancestor had four legs, and they have all inherited that trait—unless they have lost them through later evolution. These inherited ancestral traits are called plesiomorphies .

The alternative hypothesis is the multiple emergence of the same structure in several groups that can evolve independently in these groups, without the common ancestor having that trait. This process is called evolutionary convergence , which is found, for example, in the presence of fins in cetaceans and manatees, two groups of marine mammals that have evolved independently, and that have acquired their traits at different times in their history. evolutionary The appearance of the same trait, evolved in parallel and independently in two or more different groups, is called homoplasy .

If we look at the known groups with feathers, we find, on the one hand, birds and related theropod dinosaurs. On the other hand, some isolated groups within the ornithischians , which also have feathers: the heterodontosaurs, the ceratopsian Psittacosaurus —which leads us to ask if other ceratopsians could also have them—, or Kulindadromeus . However, other intermediate groups, such as the thyreophorans or the hadrosaurs, as far as we know, did not have feathers. And on the other hand, we have the recent discovery of pterosaurs.

If bird feathers are a homoplasy , it could be assumed that they have appeared at least twice: in pterosaurs and in dinosaurs; and within dinosaurs, they may have arisen between one and four times—three separate times in ornithischians, and once in theropods, counting birds.

However, if it is assumed that the feathers are a plesiomorphy , they must have already been present, at least, in the ancestors of the great group of ornithodires, among whose descendants are all the pterosaurs and dinosaurs. And the members of this group that do not have feathers would be, in any case, because they lost them. 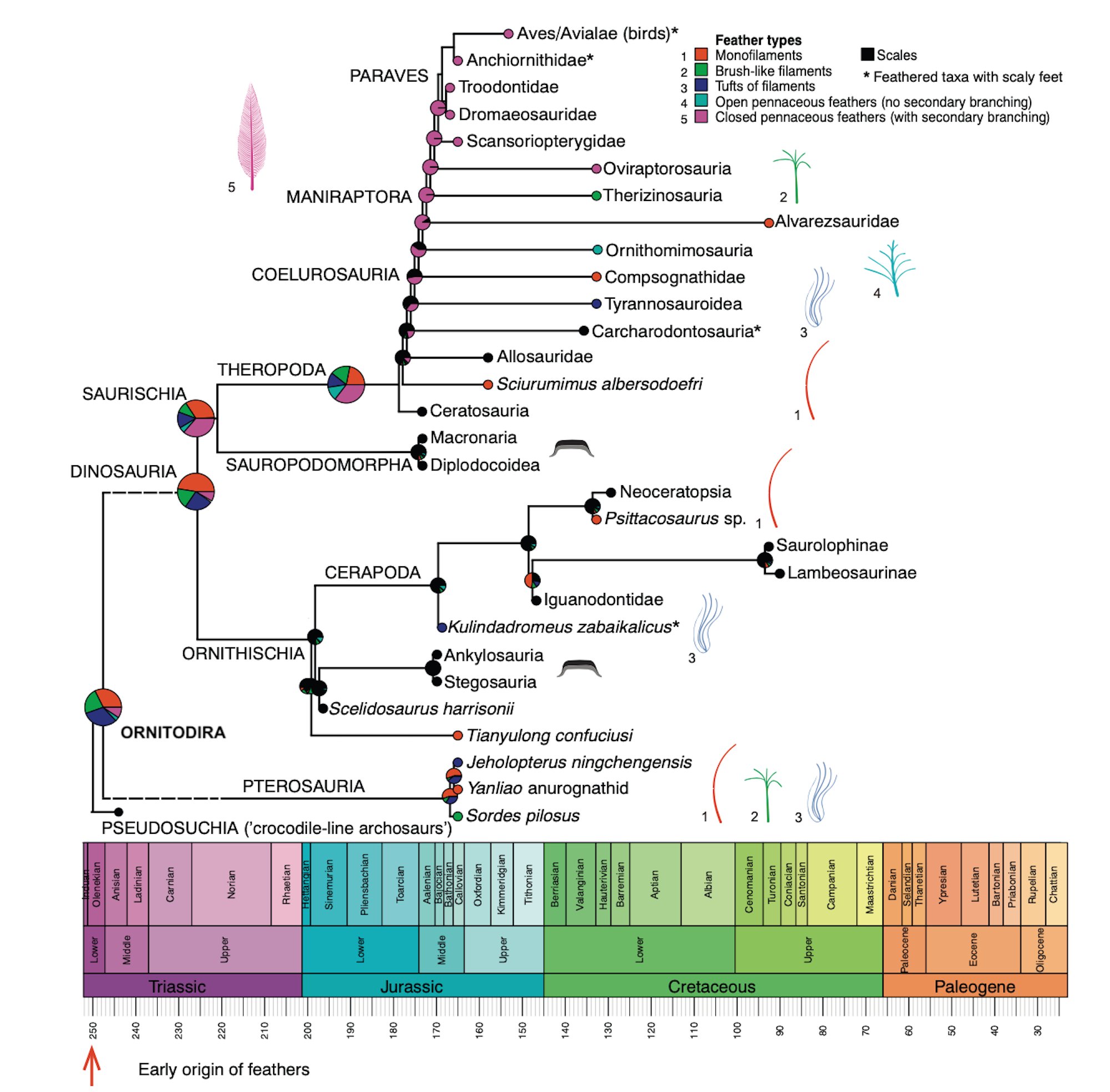 Feather phylogeny; The early origin of the feathers stands out, which represents the moment in which the genetic structure that induces the formation of the feather began to be had (MJ Benton et al., 2019).

With this approach, and taking into account that the feathers of birds, ornithischians and pterosaurs have the same structure, the principle of parsimony invites us to think of a common origin of the trait , at least in the Ornithodira group, some 230 million years ago. years, and that the trait was lost in some groups, as cetaceans have lost their hair. This hypothesis is reinforced by the existence of basal ornithodires , such as Marasuchus , which also had pycnofibres qualifying as feathers.

The genes responsible for feather formation were already present 260 million years ago , before archosaurs diversified. So those genes were not only present in all dinosaurs and pterosaurs—with or without feathers—but they are also present in crocodilians . After the diversification of crocodiles and ornithodires, about 250 million years ago, there was a duplication of genes, which favored the formation of increasingly complex structures, culminating in the up to 150 duplications that we find in modern birds.

So far, no species, modern or extinct, of feathered crocodiles are known. However, the genes are there , so under the right conditions, and if duplication of those genes occurred at some point in their lineage history, it is possible that feathered crocodiles really did exist.